Joanne M. Hill, Ph.D.
Chief Advisor for Research and Strategy at CBOE Vest
Views are my own.
chevron_left Back

Most investors have long investment horizons, as they look to provide for retirement or large future expenditures such as their children’s college education. And they likely consider equity investing as the best way to grow assets long term.  Stock values are driven by prospects for economic growth and can shield investments from the full impact of inflation. However, they also come with significant downside risk over both the short run and long run.  It turns out that the extent of equity risk can vary considerably over horizons as long as a decade or longer.  This makes it difficult to develop investment approaches looking at even long-term historical returns as a guideline for assessing risk.

The variability of long-term risk is particularly important to understand today. The current bull market, which has been accompanied by a particularly low level of downside risk, has been one of the longest in history, recently passing the ten-year mark.  Investors developing future risk forecasts and associated investment policy need to look at conditions beyond the last decade—perhaps over the last 20 years—to get a more realistic picture of what they might expect going forward. Looking at the frequency of negative returns for the S&P 500 over the last 20 years, it seems appropriate to position investments to withstand equity downside risk at least 25% of the time—be that months, quarters, or years.  The magnitude of this downside risk could range from returns of -5 to -10% in a quarter or -10 to -30% in a year. 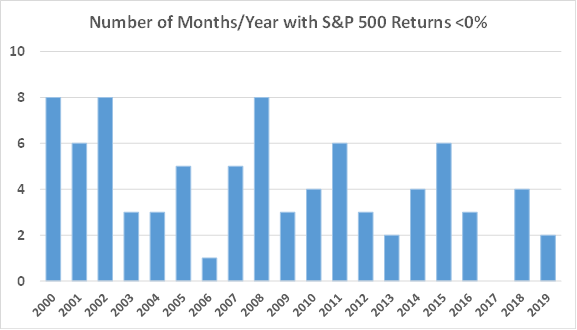 How much do these patterns for downside risk smooth out for investors looking at equity returns over slightly longer horizons, say six-month or one-year periods? Not much. The same contrast in downside risk between the 2000 – 2009 and 2010 – 2019 decades emerges when we look at six and 12-month return metrics.

The chart below shows rolling six-month and 12-month returns over the 2000 – 2019 period. You can see here that episodes of downside risk have been very infrequent since 2012. However, prior to 2012, there were quite a few instances of downside erosion of equity values that put a damper on long-term equity performance. 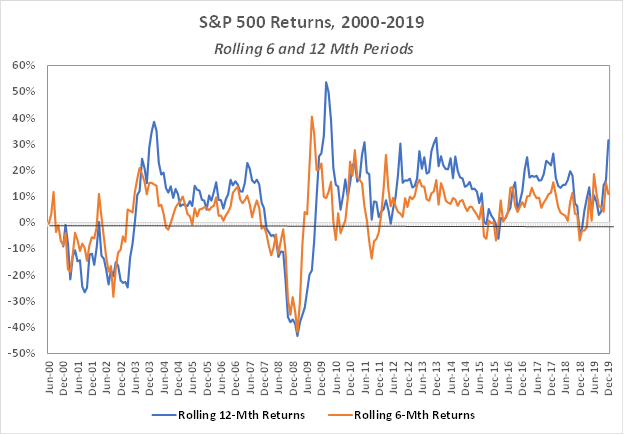 Also, as shown in the table below, 29% of the rolling six-month periods and 24% of the rolling 12-month periods have recorded negative returns over the 20-year span.  But since 2010, the frequency of downside risk periods has been significantly lower for all the horizons we examined. Negative return 12-month periods were very rare, occurring only 5% of the time, while negative six-month periods occurred only 14% of the time. This means that in the last decade, when we had declining markets for a month or a quarter, they tended to be reversed over longer horizons of six months or a year. In other words, time diversification worked very well for investors.

In contrast, during the 2000 – 2009 decade, which included two deep and sustained bear markets, as many as 44% of 12-month periods had negative returns. The frequency of downside risk episodes in this earlier decade was remarkably consistent (more than 40%) whether we looked at monthly, quarterly, or 12-month periods.

Which Market Risk Environment Lies Ahead?

How much downside risk will markets deliver over the next five to 10 years?  The current economic growth cycle and bull equity market are already quite mature. It is hard to imagine that the sustained growth environment fueled by low interest rates can continue for another several years. At the same time, the two bear markets and recessions of the 2000 – 2009 period were perhaps too extreme to serve as guideposts for risk over the next 10 years. Investors looking for a realistic assessment of long-term equity risk going forward should consider the average over the two periods to be a reasonable guide to preparing portfolios for the future.

What does this mean? Over the 20-year period since 2000, annualized S&P 500 returns were just over 6%. Investors encountered declining markets in roughly one-third of the months and quarters and in one-quarter of the 12-month time frames. This means we should not be surprised to see at least one down quarter a year going forward and to experience negative U.S. equity returns in one of every four years.

While downside risk can be avoided by shifting into fixed income or reduced by tilting toward less risky equities, there is a clear advantage to keeping potential for upside returns given the fact that three-quarters of the time, investors can expect favorable equity market conditions.  Strategies that hold equity index or factor-based equity exposure but aim to reduce risk in downside periods can have a significant impact on shoring up investment portfolios to participate in the dominant regime for equities—positive return months, quarters, and years.

The views, opinions, and content presented are for informational purposes only. They are not intended to reflect a current or past recommendation; investment, legal, tax, or accounting advice of any kind; or a solicitation of an offer to buy or sell any securities or investment services. Nothing presented should be considered to be an offer to provide any Cboe Vest product or service in any jurisdiction that would be unlawful under the securities laws of that jurisdiction. The charts and/or graphs contained herein are for educational purposes only and should not be used to predict security prices or market levels. Cboe Vest has made every attempt to ensure the accuracy and reliability of the information provided, but it cannot be guaranteed. Past performance is no guarantee of future results.

Joanne M. Hill, Ph.D.
Chief Advisor for Research and Strategy at CBOE Vest
The Vol Trap: How Long and How Low the VIX?
The View from the Hill - Perspectives on Markets and Strategies

Cboe Vest, LLC, a subsidiary of Cboe Global Markets, Inc. (the latter two entities, collectively, “Cboe”) owns a minority stake in Cboe Vest Group Inc. (“Cboe Vest”). Certain option and index products, including those proprietary to Cboe, may be recommended by Cboe Vest and its subsidiaries from time to time. Such products may trade on one or more Cboe-affiliated exchanges, resulting in transaction and other revenues accruing to Cboe. Any views expressed herein are solely those of Cboe Vest and not of Cboe.

Cboe Vest Financial LLC ("Cboe VestFin") is registered with the U.S. Securities and Exchange Commission ("SEC") as an Investment Advisor. Registration does not imply a certain level of skill or training. The information in this website has not been approved or verified by the SEC or by any state securities authority. This is not an offer or solicitation for investment advisory services, or other products or services in any jurisdictions where Cboe VestFin is not authorized to do business or where such offer or solicitation would be contrary to the securities laws or other local laws and regulations of that jurisdiction.

*Usage of these logos does not imply an endorsement.

All investments involve risk, and the past performance of a security or financial product does not guarantee future results or returns. There is always the potential of losing money when you invest in securities or investment strategies. Investors should consider their investment objectives and risks carefully before investing. Options have specific investor risks. Characteristics and risks of exchange-traded options are available at Cboe's website and Cboe Options Education Center.

The information on the website was obtained from sources believed to be accurate, but we do not guarantee that it is accurate or complete. Hyperlinks to third-party websites contain information that may be of interest or use to you. Third-party websites, research and tools are from sources deemed reliable. Cboe Vest does not guarantee accuracy or completeness of the information and makes no assurances with respect to results to be obtained from their use.

Cboe Vest communications and communications emanating from its social media community are for informational purposes only and are not intended as an offer or solicitation for the purchase or sale of any financial instrument, or as an official confirmation of any transaction or an advertisement of investment advisory services. The Cboe Vest website provides its users links to social media sites and email. The linked social media and email messages are pre-populated. However, these messages can be deleted or edited by Cboe Vest users, who are under no obligation to send any pre-populated messages. All market prices, data and other information available through Cboe Vest are not warranted as to completeness or accuracy and are subject to change without notice. Any comments or statements made herein do not reflect the views of Cboe Vest Group Inc. or any of their subsidiaries or affiliates.  Full Disclosure