The View from the Hill - Perspectives on Markets and Strategies
Returns Relative to Risk Hit 20-Year High in 2017; Investment Implications For 2018

Joanne M. Hill, Ph.D.
Chief Advisor for Research and Strategy at CBOE Vest
Views are my own.
chevron_left Back

S&P 500 Return Relative to Risk: 2017 in the Context of the Last Three Decades

Much attention has been given to the low level of S&P 500 volatility in 2017, with its annualized standard deviation of 6.7%, the lowest level since 1964. But what also stands out is that this low-risk environment has been accompanied by strong S&P 500 returns—21.8% in 2017.

The chart below shows a scatter plot of the total return and risk of the S&P 500 for each of the last 30 calendar years. Over this period, the average calendar-year return was 12.0% and the average standard deviation was 15.9%. This means that in 2017, the S&P 500 delivered almost two times the average return and less than half the average risk. 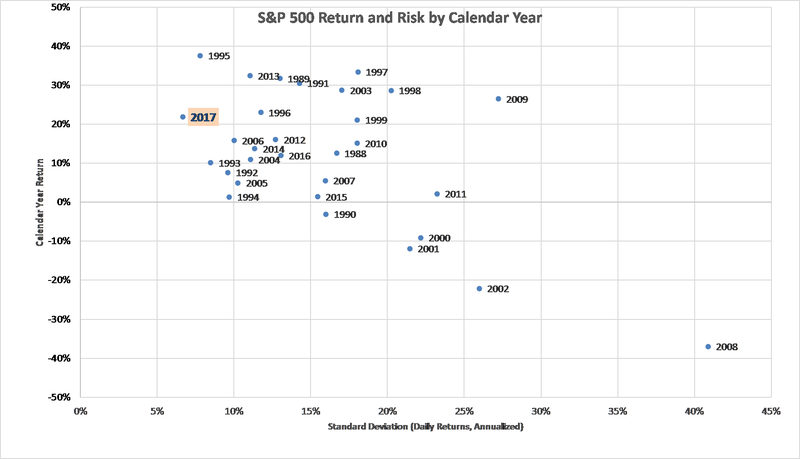 The most common financial measure that captures the extent to which return is rewarded for risk in the equity market is the Sharpe Ratio, introduced decades ago by Nobel prize winning financial economist William Sharpe. This measure looks at returns relative to risk (standard deviation). It isolates the returns from taking risk by subtracting from the S&P 500 return the returns of a “risk-free” investment in that same period. For most investment strategies evaluated over long periods (e.g. five to-10 years), a Sharpe Ratio of 1.0 is considered to be strong performance.

The chart below shows the Sharpe Ratios for each of the last 30 years. With a Sharpe ratio over 3.0, 2017 stands out as unusual in the history of U.S. equity markets. The average calendar-year Sharpe Ratio over the last three decades was 0.82. The only recent year that even came close to 2017 was 2013, when the S&P 500 delivered a 34.4% return with standard deviation of 11.05%, below average but not nearly as low as 2017. 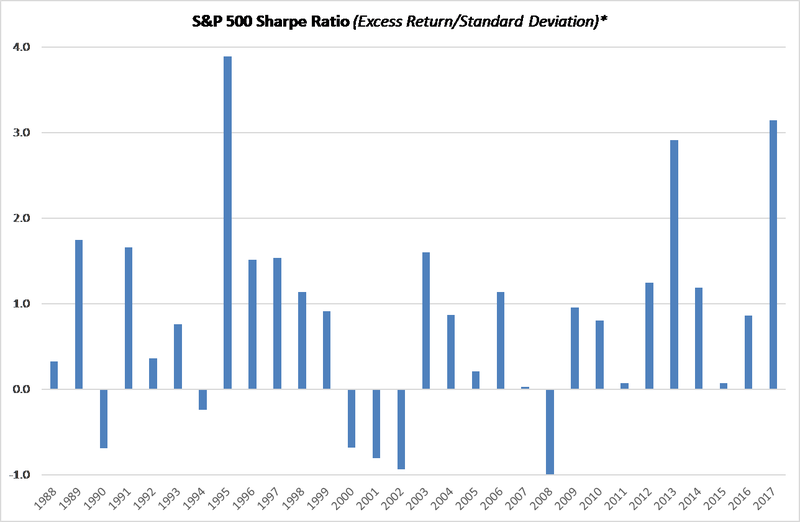 * Excess return for each calendar year is calculated as S&P 500 total return minus the yield of a one-year U.S. Treasury Bill at the start of the year.

In my opinion, we won’t see a repeat of the outstanding returns relative to risk like we had in 2017. Something has to give. Risk will likely be higher and return lower. The good news is that just because the S&P 500 had very high returns in 2017 does not mean that the next year will deliver below-average returns. If we look at the very high return years of 1995, 1997, 2003, 2009, and 2013, we see that returns for the following calendar years were lower but still solid.  That being said, investors should be prepared for more volatility to earn those returns.

Strategies consistent with a more moderate return and higher risk U.S. equity environment would be those that have a stronger focus on factors such as quality, dividend growth, and earnings growth combined with value, and that favor lower volatility stocks. Other strategies to consider are those that look to boost income by capturing some of the higher volatility anticipated in 2018 through the sale of options. These options strategies include ones that compensate investors for committing to cap some portion of upside returns (covered-call writing) or to buy equity exposure at lower prices (collateralized put writing). Short-term option premiums tend to adapt quickly to changing volatility of the underlying security or index, so the premiums for covered-call and put selling should be higher as risk moves up.

I believe that higher risk is clearly ahead for equity investors. While we have a long way to go to reach even average risk levels (volatility regimes tend to be sticky at low or high levels), a more cautious approach to equity investing is warranted for 2018.

Joanne M. Hill, Ph.D.
Chief Advisor for Research and Strategy at CBOE Vest
Related Articles
The Long-Term Value of Managing Risk: More Assets for the Rebound
The View from the Hill - Perspectives on Markets and Strategies

Joanne M. Hill, Ph.D.
Chief Advisor for Research and Strategy at CBOE Vest
From Market Calm to Uncharted Territory
The View from the Hill - Perspectives on Markets and Strategies

Cboe Vest, LLC, a subsidiary of Cboe Global Markets, Inc. (the latter two entities, collectively, “Cboe”) owns a minority stake in Cboe Vest Group Inc. (“Cboe Vest”). Certain option and index products, including those proprietary to Cboe, may be recommended by Cboe Vest and its subsidiaries from time to time. Such products may trade on one or more Cboe-affiliated exchanges, resulting in transaction and other revenues accruing to Cboe. Any views expressed herein are solely those of Cboe Vest and not of Cboe.

Cboe Vest Financial LLC ("Cboe VestFin") is registered with the U.S. Securities and Exchange Commission ("SEC") as an Investment Advisor. Registration does not imply a certain level of skill or training. The information in this website has not been approved or verified by the SEC or by any state securities authority. This is not an offer or solicitation for investment advisory services, or other products or services in any jurisdictions where Cboe VestFin is not authorized to do business or where such offer or solicitation would be contrary to the securities laws or other local laws and regulations of that jurisdiction.

*Usage of these logos does not imply an endorsement.

All investments involve risk, and the past performance of a security or financial product does not guarantee future results or returns. There is always the potential of losing money when you invest in securities or investment strategies. Investors should consider their investment objectives and risks carefully before investing. Options have specific investor risks. Characteristics and risks of exchange-traded options are available at Cboe's website and Cboe Options Education Center.

The information on the website was obtained from sources believed to be accurate, but we do not guarantee that it is accurate or complete. Hyperlinks to third-party websites contain information that may be of interest or use to you. Third-party websites, research and tools are from sources deemed reliable. Cboe Vest does not guarantee accuracy or completeness of the information and makes no assurances with respect to results to be obtained from their use.

Cboe Vest communications and communications emanating from its social media community are for informational purposes only and are not intended as an offer or solicitation for the purchase or sale of any financial instrument, or as an official confirmation of any transaction or an advertisement of investment advisory services. The Cboe Vest website provides its users links to social media sites and email. The linked social media and email messages are pre-populated. However, these messages can be deleted or edited by Cboe Vest users, who are under no obligation to send any pre-populated messages. All market prices, data and other information available through Cboe Vest are not warranted as to completeness or accuracy and are subject to change without notice. Any comments or statements made herein do not reflect the views of Cboe Vest Group Inc. or any of their subsidiaries or affiliates.  Full Disclosure